Welcome to a behind-the-scenes look at the research and artwork that goes into making each scene of iBIBLE. Today, we look at Esau and Jacob. 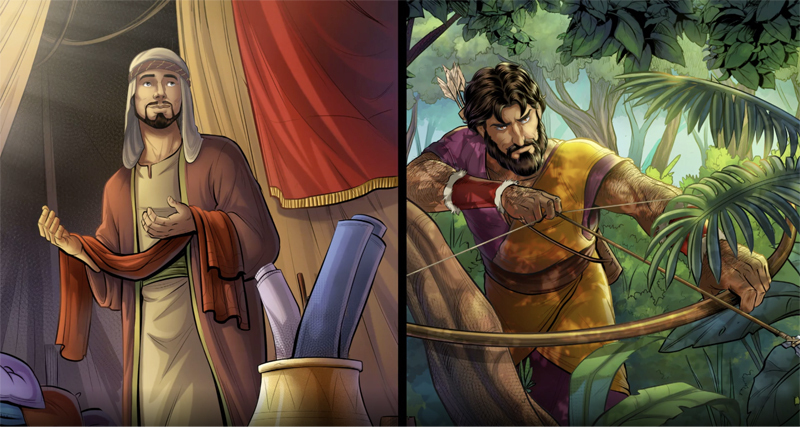 In our last iBIBLE “Behind the Scenes,” we looked at the marriage of Isaac and Rebekah. We know that Rebekah was unable to bear children, so Isaac cried out to God for help. After nearly 20 years of marriage, by the grace of God, Rebekah became pregnant with twins.

However, the children struggled in Rebekah’s womb. She said, “If it is thus, why is this happening to me?” (Gen. 25:22, ESV) and went to the Lord in prayer. And the Lord said to her:

“Two nations are in your womb, and two peoples from within you shall be divided; the one shall be stronger than the other, the older shall serve the younger.” —Gen. 25:23 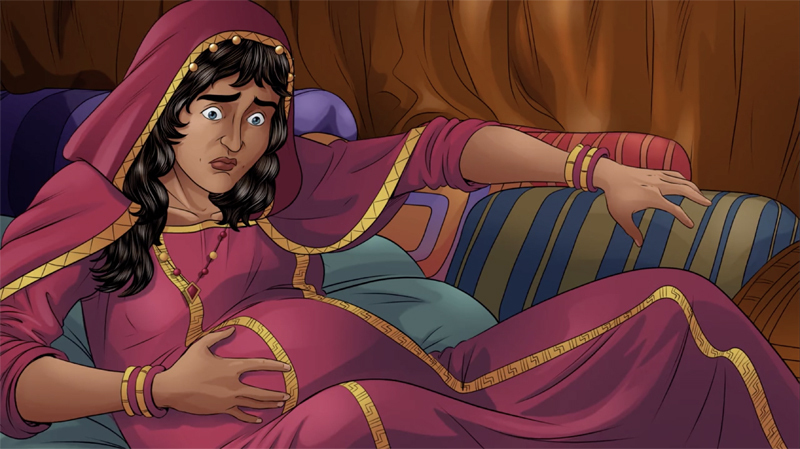 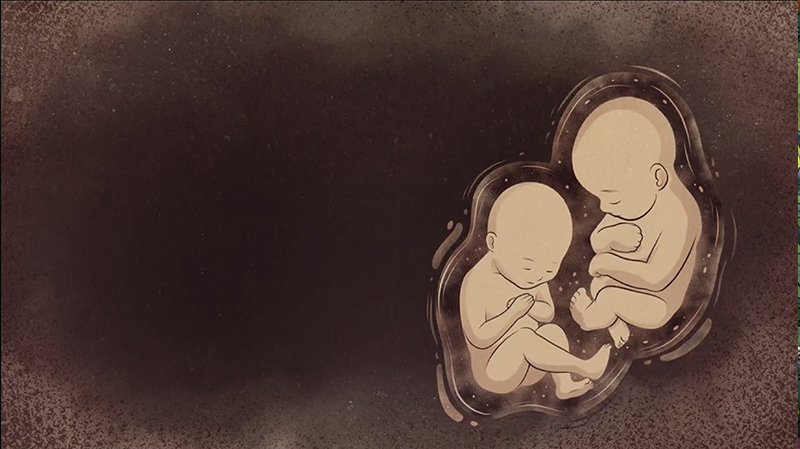 God reveals to Rebekah that she is having twins

It is interesting to note that the Complete Jewish Bible translates verse 22 in this way: “The children fought with each other inside her so much that she said ‘If it’s going to be this way, why go on living?’” This demonstrates that Rebekah was in extreme turmoil as her two sons struggled in her womb. The Scripture passage does not reveal if God gave her any relief from her pain in that moment, but instead it tells us what God says to her. He tells Rebekah about the division that will arise between her two sons, and that the older will serve the younger.

When Rebekah gave birth, the younger son grabbed the heel of the older son. As the Scripture reveals:

When her days to give birth were completed, behold, there were twins in her womb. The first came out red, all his body like a hairy cloak, so they called his name Esau. Afterward his brother came out with his hand holding Esau’s heel, so his name was called Jacob. —Gen. 25:24–26a 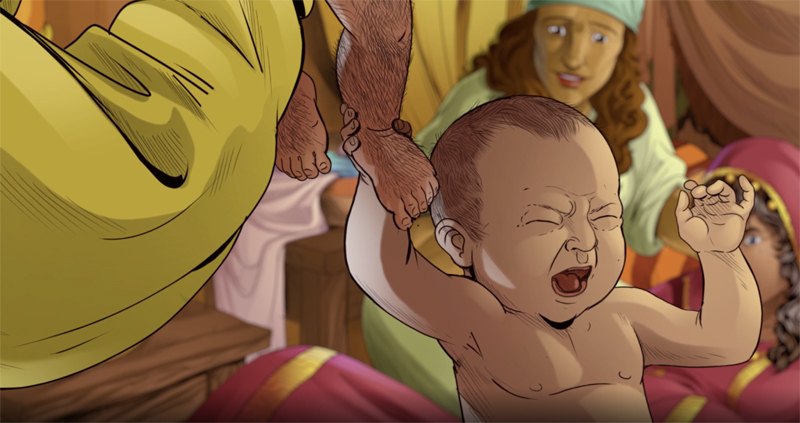 SIDENOTE: Some traditions teach that Jacob was trying to pull Esau back, so that he would be born first. Following this tradition, we often read that Jacob was “the supplanter,” a person who takes the place of another. This becomes more relevant as the story unfolds.

As the twins grew up, they differed greatly. Esau became a skilled hunter, and an outdoorsman, while Jacob is said to be a quiet man who “dwelled in tents.” It is also recorded that Isaac loved Esau because he ate the game his eldest son hunted, but Rebekah loved Jacob. (Gen. 25:28)

Jacob and Esau grow up

Esau, being the eldest son, was to receive two distinct honors of inheritance. First was his birthright, and second was his father’s blessing. However, the word of the Lord stated that the older would serve the younger. One day when Esau returned from the field, exhausted and hungry, he easily gave up the first of these two inheritances for a bowl of stew!

Once when Jacob was cooking stew, Esau came in from the field, and he was exhausted. And Esau said to Jacob, “Let me eat some of that red stew, for I am exhausted!” (Therefore his name was called Edom.) Jacob said, “Sell me your birthright now.” Esau said, “I am about to die; of what use is a birthright to me?” Jacob said, “Swear to me now.” So he swore to him and sold his birthright to Jacob. Then Jacob gave Esau bread and lentil stew, and he ate and drank and rose and went his way. Thus Esau despised his birthright. —Gen. 25:29–34 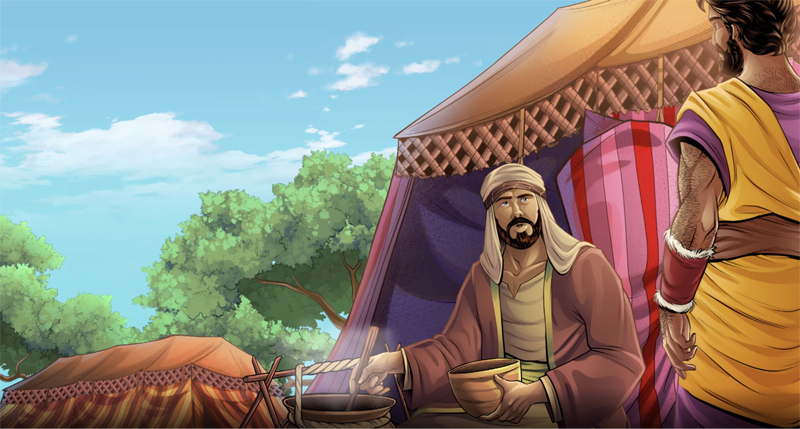 Jacob offers Esau stew in exchange for his birthright 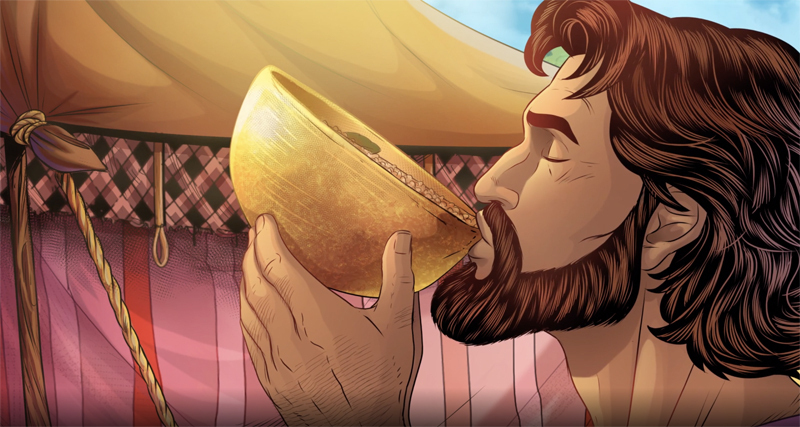 It would be easy to look at Jacob and think he was being unreasonable by offering the stew in exchange for such a high price. But the Scripture ends this passage with a clear acknowledgement that Esau did not value his birthright, and therefore traded it for temporary pleasure. In giving up his birthright, Esau gave up his rightful position as the family leader to succeed his father.

The word that God spoke to Rebekah is now fulfilled in part. Next week, we will look at how the second half of the word of God is fulfilled when Isaac bestows the blessing of the firstborn on Jacob instead of Esau.

The events revealed in Scripture are rich in tradition, and demonstrate that the Words of God are true. Jacob found favor in the eyes of God, while Esau despised his own birthright. The world is in continual conflict with those who seek God and His kingdom, and those who seek their own ways.

We thank you for your support in helping us produce iBIBLE to reach our children, grandchildren, and front-line missions workers with the complete story of God’s Word. Together we can bring the Bible to life like never before!