The Life of Isaac (Part Four)

The Life of Isaac (Part Four)

Welcome to a behind-the-scenes look at the research and artwork that goes into making each scene of iBIBLE. Today, we look at Isaac's marriage. 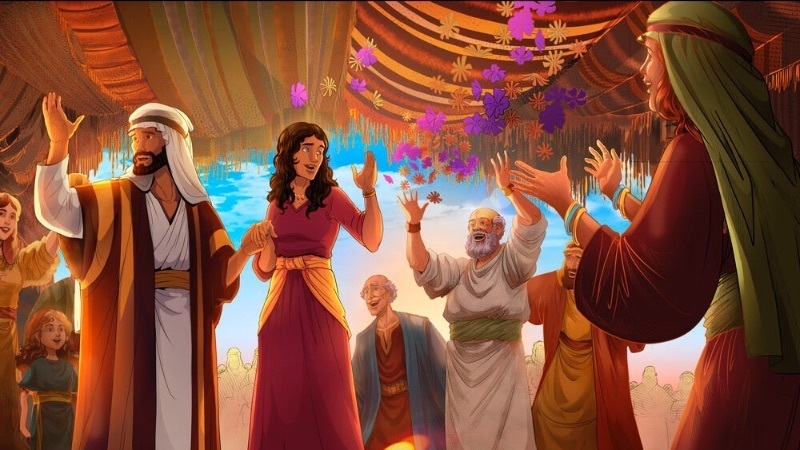 Last week, we looked at the incredibly difficult test Abraham faced when he was asked to sacrifice his son Isaac. Isaac's marriage is the next major event in his life recorded in the Scriptures.

Isaac was 37 years old and without a wife when his mother Sarah passed away. After her death, Isaac's father Abraham sought to obtain a wife for him. Abraham did not want Isaac to marry one of the Canaanites (they were not God's chosen people), but wanted him to take a wife from his father’s family that had remained in Haran instead.

Abraham went to his trusted servant and said:

Then, Abraham's servant asked him a pertinent question: what should he do if the chosen woman does not want to come back to Canaan to marry Isaac? And, if she wants to remain in Haran, should he then bring Isaac there to be with her?

The servant's question is reasonable. However, Abraham was not looking at this situation through a practical lens, but through the eyes of God’s promise that his descendants would be like the stars of the heavens, and that God had given them this new land to dwell in.

SIDENOTE: While we are accustomed to raising a right hand in order to make an oath, at the time of Abraham, it was customary to put one's hand under another person's thigh to make a binding promise. This also happens elsewhere in Scripture, like when Joseph promises not to bury his father Israel in Egypt. (Gen. 47)

Abraham said to him, “See to it that you do not take my son back there. The Lord, the God of heaven, who took me from my father's house and from the land of my kindred, and who spoke to me and swore to me, ‘To your offspring I will give this land,’ he will send his angel before you, and you shall take a wife for my son from there. But if the woman is not willing to follow you, then you will be free from this oath of mine; only you must not take my son back there.” –Gen. 24:6-8

So, the servant made his oath to Abraham, loaded ten camels with goods, and set out to go to Haran. When he reached the town of Nahor, he had the camels kneel near a well outside of the town. It was nearing evening, and at that time, the young women would go out to the wells to draw water. And the servant said,

“O Lord, God of my master Abraham, please grant me success today and show steadfast love to my master Abraham. Behold, I am standing by the spring of water, and the daughters of the men of the city are coming out to draw water. Let the young woman to whom I shall say, ‘Please let down your jar that I may drink,’ and who shall say, ‘Drink, and I will water your camels’—let her be the one whom you have appointed for your servant Isaac. By this I shall know that you have shown steadfast love to my master.” –Gen. 24:12-14 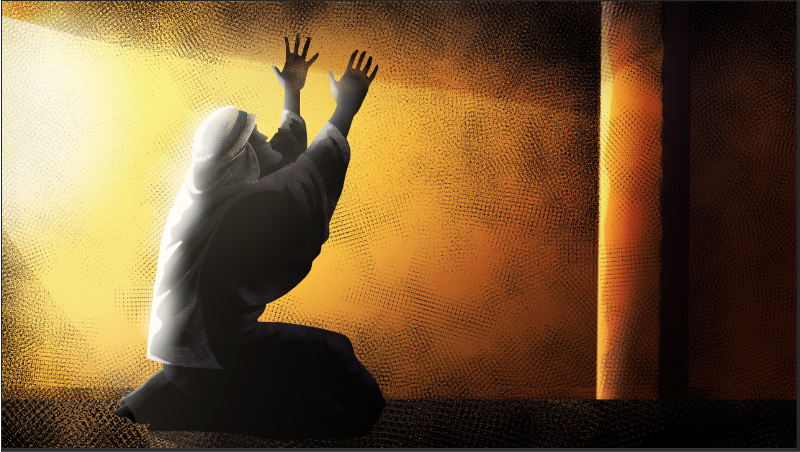 Before the servant had finished speaking, an attractive young woman, who was of age to be married, appeared with her water jug on her shoulders. She went down to the spring and filled her water jar. Seeing this, the servant ran to meet her and asked, “Please give me a little water to drink from your jar.” She did as the servant requested. However, just as the servant had prayed, she went one step further, saying “I will also draw water for your camels.” (Gen. 24:46)

What a beautiful example of God’s faithfulness. Even the servant, when he spoke to God said, “By this I shall know that you have shown steadfast love to my master.” His prayer was not for personal gain, but to honor his master Abraham. His desire could have been for himself. He could have sought to be honored in the eyes of Abraham, or even in the eyes of God. However, he shows his humility and his faith through this prayer.

As the story progresses, we learn this young woman is named Rebekah. And, after giving water to the servant, she proceeded to give water to each of the ten camels! Abraham's servant simply watched in silence, witnessing the miraculous answer to his prayer unfolding before his eyes.

Then the servant gave gifts to Rebekah and bowed down and worshiped the Lord, saying:

“Blessed be the Lord, the God of my master Abraham, who has not forsaken his steadfast love and his faithfulness toward my master. As for me, the Lord has led me in the way to the house of my master's kinsman." –Gen. 24:27

When Rebekah’s brother, Laban, heard about what had happened, he quickly ran down to the spring to meet this visitor. And, when he saw the gifts that the servant had given to Rebekah, he insisted that the servant, along with his camels should come stay at his house.

SIDENOTE: We do not know if Laban was influenced by the apparent riches of the servant. We do know that, in the years to come, when Isaac’s son Jacob visits Laban, Laban repeatedly demonstrates his lack of integrity and pursuit of personal gain. It is interesting that Scripture reveals how he quickly offered up his home AFTER he saw the gifts of gold that were given to his sister Rebekah. 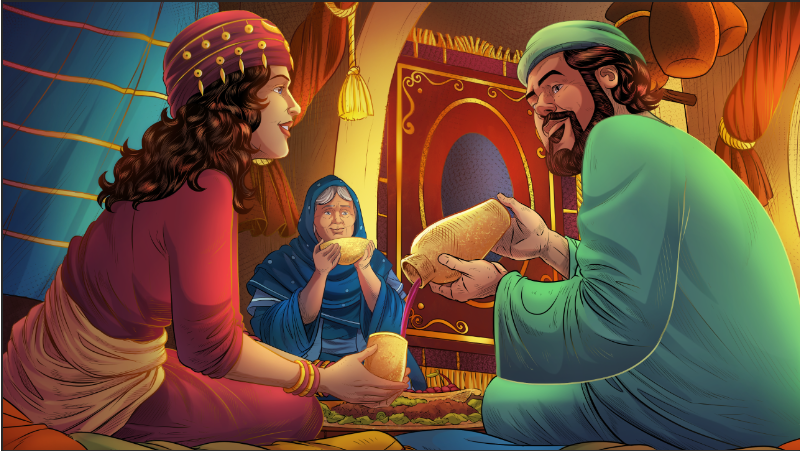 Laban asks Rebekah if she will go marry Isaac

At Laban’s house, Abraham's servant reveals why he has come and explains everything that had happened up to that point. When Laban and Bethuel (Rebekah’s brother and father) heard all that servant had to say, they answered, “This thing has come from the Lord; we cannot speak to you bad or good. Behold, Rebekah is before you; take her and go, and let her be the wife of your master's son, as the Lord has spoken." (Gen. 24:50b-51) 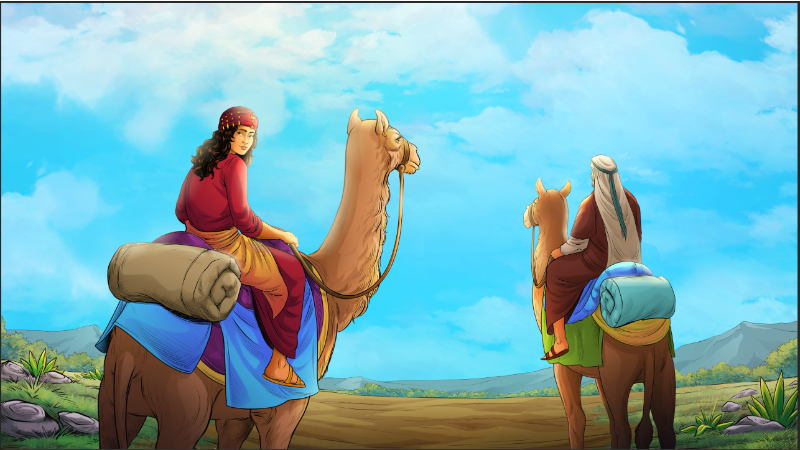 They journeyed an estimated 400 miles back to Canaan, but before reaching Abraham’s home, Rebekah saw Isaac approaching her from a field where he was meditating. Isaac met Rebekah there, and when he learned all that the servant had done, Isaac brought Rebekah into the tent of his mother and married her.

Then Isaac brought her into the tent of Sarah his mother and took Rebekah, and she became his wife, and he loved her. So Isaac was comforted after his mother’s death. –Gen. 24:67

Like his father Abraham, God has blessed Isaac with a beautiful wife. However his wife, like his mother, is barren. Knowing the miracle of his own birth, Isaac cries out to the only One who can give him a child to fulfill the promises made to Abraham. God had promised to fill the land with kings, and their descendants would be too many to count. So, Isaac prays to God, and God gives them not one, but two children—twin sons—who will soon have their own adventures. 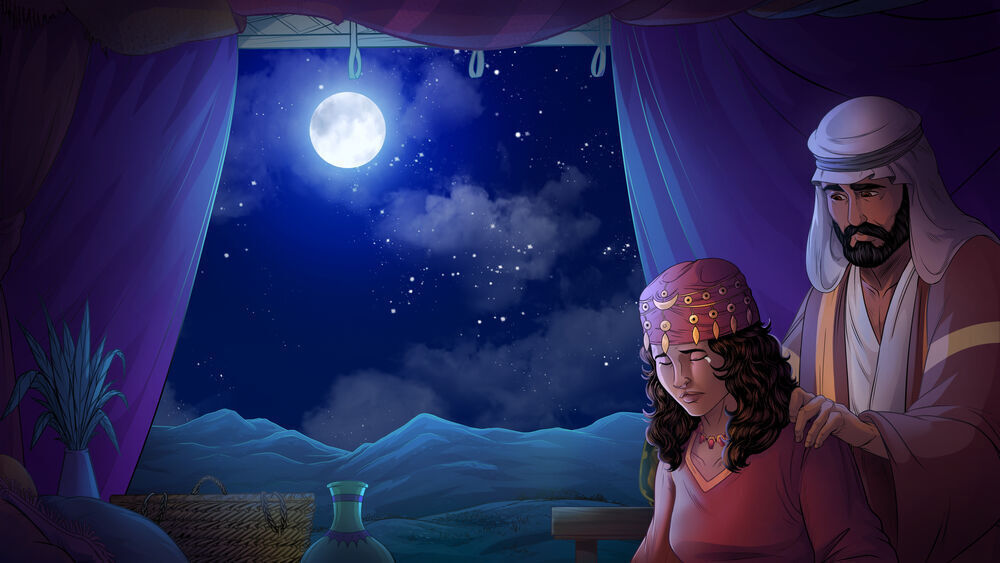 Isaac and Rebekah are sad that they cannot have children

When reading the Scriptures, it can be difficult to piece together all the intricacies of the events, and visualize how they intertwine into a grand narrative. However, when presented within a visual format—animated with dramatic audio—the events come to life like never before.

At the core of iBIBLE is our desire to present the Scriptures, passage-by-passage (within the narrative) and event-by-event, into one cohesive story. This exposes the Bible’s Divine narrative: God’s story to redeem mankind. Thank you for your prayers and your faithful support.