Welcome to a behind-the-scenes look at the research and artwork that goes into making each scene of iBIBLE. Today, we take a look at the little-known character named Lamech. 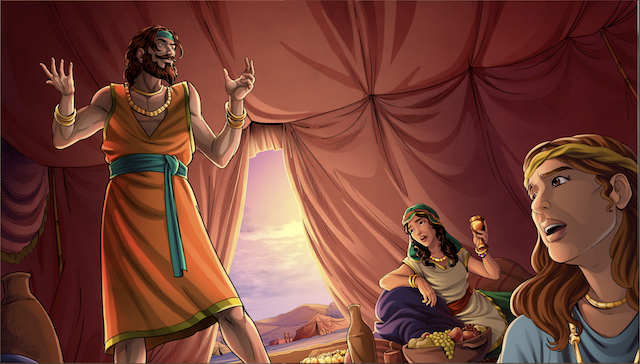 While illustrating iBIBLE, we have the privilege of taking a closer look at some of the more unusual passages of Scripture, and we get the opportunity to reflect on aspects that we may not have considered before. For example, the passage about Lamech from Genesis 4:

Lamech said to his wives: “Adah and Zillah, hear my voice; you wives of Lamech, listen to what I say: I have killed a man for wounding me, a young man for striking me. If Cain's revenge is sevenfold, then Lamech's is seventy-sevenfold.” —Gen. 4:23–24 [ESV]

That’s it. That’s all is told to us about what Lamech says to his wives. There are a few facts that we can pull out of this story: Lamech, a man with two wives and the father of Jubal (inventor of many instruments) and Tubal-Cain (bronze and iron metalworker), killed someone and is claiming 11 times the protection that God gave to Cain. 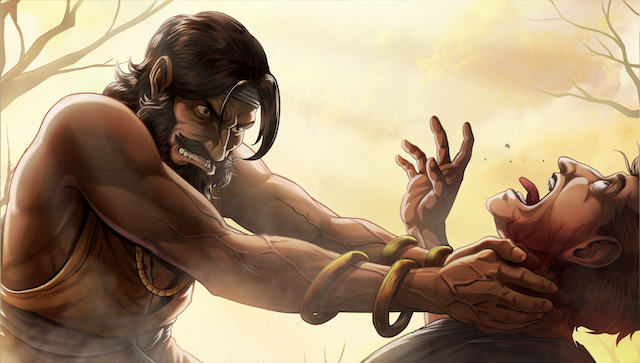 What protection did God give to Cain?
After Cain killed Abel, God rebuked him for it and banished him. Cain was terrified that he would be killed:

Cain said to the Lord, “My punishment is greater than I can bear. Behold, you have driven me today away from the ground, and from your face I shall be hidden. I shall be a fugitive and a wanderer on the earth, and whoever finds me will kill me.” —Gen. 4:13–14

But God’s judgment on Cain was not focused on someone hurting Cain, and there is no record in Scripture that anyone did. God was merciful even to this man who had spilled his brother’s blood. He protected him:

Then the Lord said to him, “Not so! If anyone kills Cain, vengeance shall be taken on him sevenfold.” And the Lord put a mark on Cain, lest any who found him should attack him. —Gen. 4:15

What does this have to do with Lamech?
Did God offer him protection and mark him? There is no record of this in Scripture. Instead, we see that Lamech took it upon himself to claim God’s protection and mercy for himself.

Ancient writers and commentaries are full of speculation about this passage: was Lamech saying that because his son made weapons, he could exact vengeance? Was he pacifying his worried wives? Was he claiming that he was justified in killing this person? Was he repentant or bragging? Speculations abound with no definitive consensus. We took the position that he was falsely claiming God’s protection and bragging.

However, the numbers seventy and seven remind us of another passage:

Then came Peter to him, and said, Lord, how oft shall my brother sin against me, and I forgive him? till seven times? Jesus saith unto him, I say not unto thee, Until seven times: but, Until seventy times seven. —Matt. 18:21­–22 [KJV]

Peter asked Jesus this question, and as an Israelite, he was probably familiar with the stories of the Tanak (Old Testament). Maybe he was even alluding to Cain when asking about forgiveness “up to seven times.” When Jesus replied, was he referencing Cain’s seven times? Or possibly Lamech’s self-claimed seventy-seven times?

The stories of Cain and Lamech talk about vengeance, retaliation, retribution, and consequence. Jesus speaks of forgiveness beyond what anyone had ever considered before: seventy times seven! Many commentaries understand this to mean that Jesus was telling Peter that he should forgive his brother a limitless number of times.

There is poetry for the soul in these passages: there is a small, determined amount of vengeance, but limitless Divine forgiveness.

We don’t know for sure if Jesus’s mention of “seven” or seventy” was referencing Cain and/or Lamech. However, when producing a complete Biblical narrative, events like these that are so often overlooked can come to life like never before.