Reuben and the Sons of Jacob (Part 1)

This week we continue our “deep dive” into the family of Jacob. In the past few weeks, we looked at his two main wives: Leah and Rachel. Today, we take a look at Jacob’s sons, especially his firstborn Reuben. 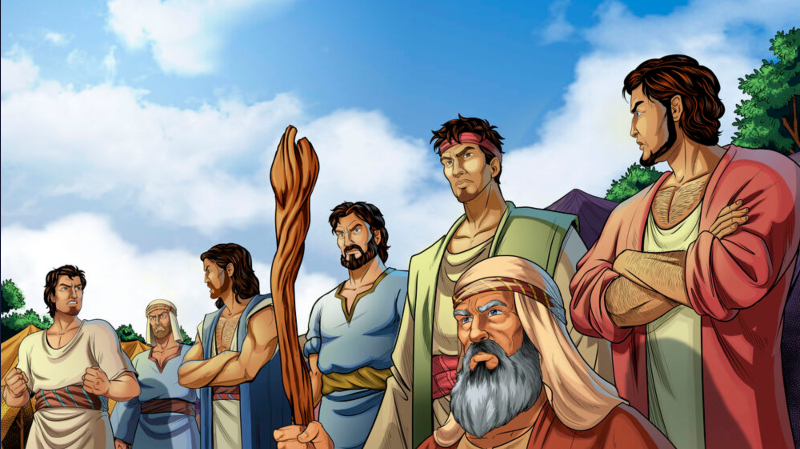 Not much is mentioned individually about many of Jacob’s sons, but that is not the case for Reuben. Reuben was the firstborn of the 12 sons of Jacob. He could not have started off in a more advantageous place! Unfortunately, things did not end up so well for Reuben, as we will see.

The first mentions of Reuben show him in a good light. Before his family left Haran, when he was somewhere between 3 and 5 years old, he was already responsible and helpful. He went into the field, found some herbs, dug them up and brought them to his mother.

In the days of wheat harvest Reuben went and found mandrakes in the field and brought them to his mother Leah. —Gen. 30:14a [ESV] 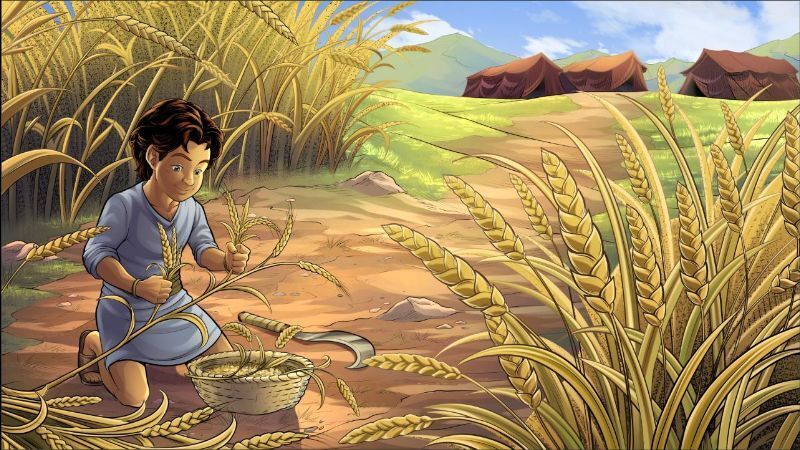 Once Jacob’s family left Haran, the sons of Jacob went through an intense and unusual decade. It started with them packing up and running from their grandfather Laban. At this point, the youngest, Joseph, was 6–7 years old, and the oldest, Reuben, was 12–13 years of age. They were put on camels, and they fled:

So Jacob arose and set his sons and his wives on camels. He drove away all his livestock, all his property that he had gained…to go to the land of Canaan to his father Isaac. Laban had gone to shear his sheep, and Rachel stole her father’s household gods. And Jacob tricked Laban the Aramean, by not telling him that he intended to flee. He fled with all that he had and arose and crossed the Euphrates. —Gen. 31:17–21a 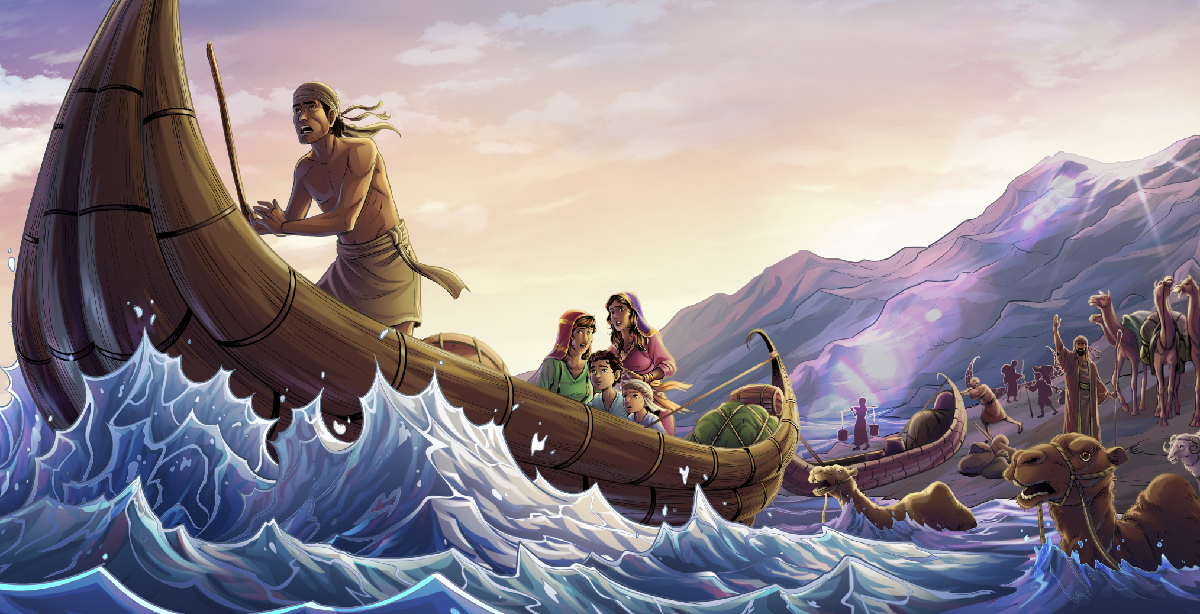 However, their father’s escape plan didn’t go exactly as he had hoped. Laban caught up, searched through all of their possessions looking for idols, and came up empty:

Then Laban answered and said to Jacob, “The daughters are my daughters, the children are my children, the flocks are my flocks, and all that you see is mine…Come now, let us make a covenant, you and I…So Jacob took a stone and set it up as a pillar… Early in the morning Laban arose and kissed his grandchildren and his daughters and blessed them. Then Laban departed and returned home. —Gen. 31: 43a, 45, 55

Then Jacob was greatly afraid and distressed. He divided the people who were with him, and the flocks and herds and camels, into two camps, thinking, “If Esau comes to the one camp and attacks it, then the camp that is left will escape.” —Gen. 32:7–8 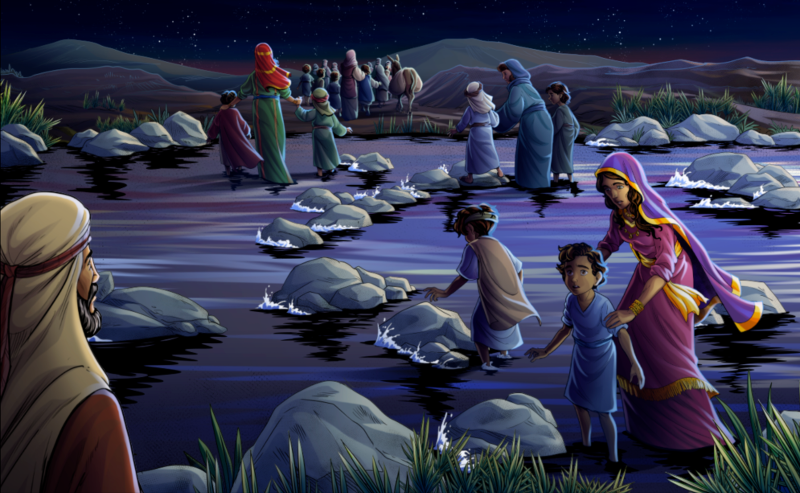 The same night he arose and took his two wives, his two female servants, and his eleven children, and crossed the ford of the Jabbok. He took them and sent them across the stream, and everything else that he had. —Gen. 32:22–23

And Jacob lifted up his eyes and looked, and behold, Esau was coming, and four hundred men with him. So he divided the children among Leah and Rachel and the two female servants. And he put the servants with their children in front, then Leah with her children, and Rachel and Joseph last of all. He himself went on before them, bowing himself to the ground seven times, until he came near to his brother.

But Esau ran to meet him and embraced him and fell on his neck and kissed him, and they wept. And when Esau lifted up his eyes and saw the women and children, he said, “Who are these with you?” Jacob said, “The children whom God has graciously given your servant.”...Leah likewise and her children drew near and bowed down. —Genesis 33:1–5, 7a 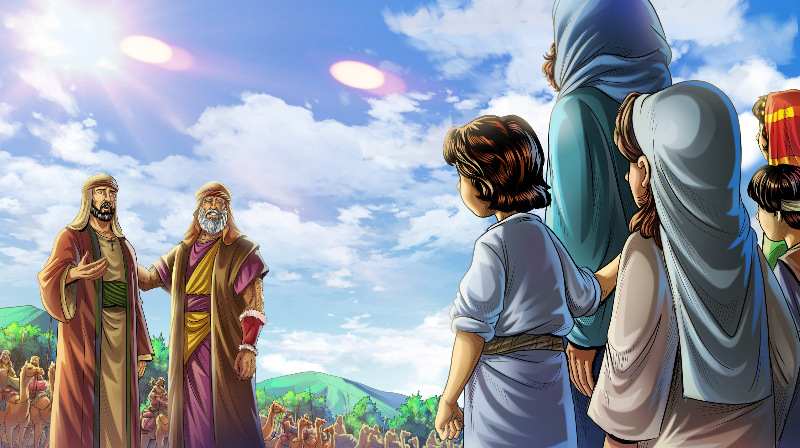 What a journey for the sons of Jacob! Clearly, this helped forge their characters, and they spent the next few years in different places in the Promised Land, tending to their flocks, and growing into men.

Eventually, they arrived at Shechem. Their father bought a plot of land near Shechem, and they continued their pastoral life. Then a terrible thing happened. Dinah, their only sister, went into town and was captured and harmed by Shechem, the ruler’s son. Jacob and his sons found out, and they were furious! The sons decided on a harsh course of action:

[Shechem]…saw [Dinah], he seized her and lay with her and humiliated her…Now Jacob heard that [Shechem] had defiled his daughter Dinah. But his sons were with his livestock in the field, so Jacob held his peace until they came. And Hamor the father of Shechem went out to Jacob to speak with him. The sons of Jacob had come in from the field as soon as they heard of it, and the men were indignant and very angry…Hamor spoke with them, saying, “The soul of my son Shechem longs for your daughter. Please give her to him to be his wife…The sons of Jacob answered Shechem and his father Hamor deceitfully…“Only on this condition will we agree with you—that you will become as we are by every male among you being circumcised.”…Their words pleased Hamor and Hamor’s son Shechem... And all who went out of the gate of his city listened to Hamor and his son Shechem, and every male was circumcised. —Gen. 34:1–24, summarized 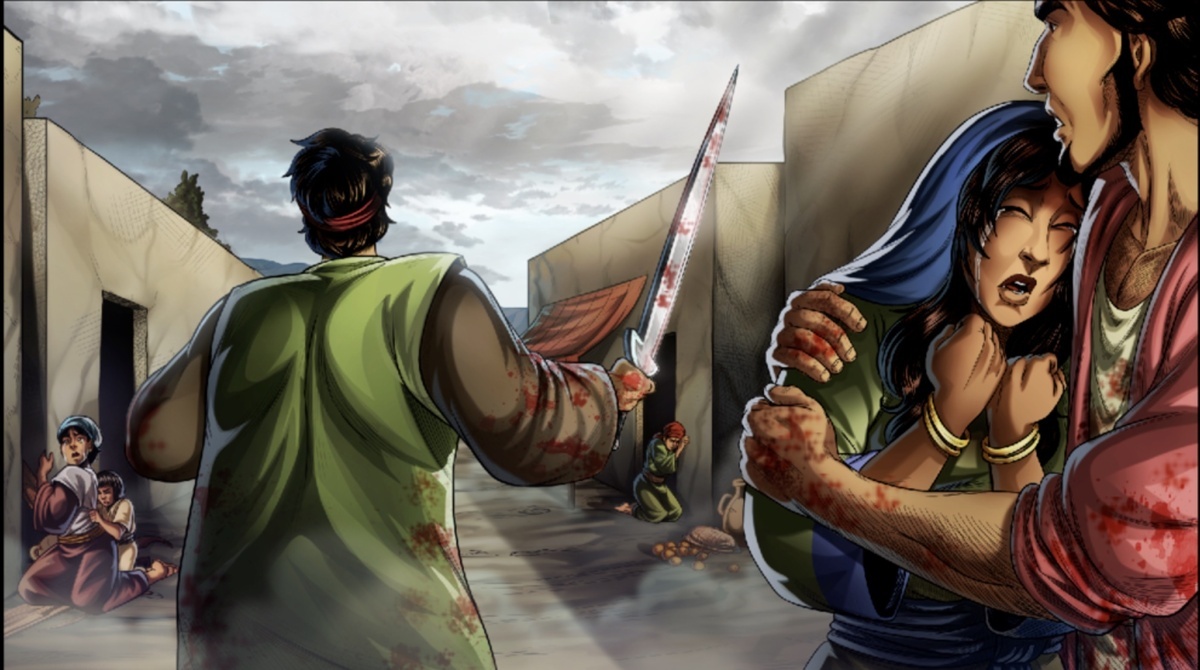 Once all the men were incapacitated and sore, the sons of Jacob took action. They went into town and slayed all the men in the city, and then they plundered the city, taking the women, children, money, and flocks:

On the third day, when they were sore, two of the sons of Jacob, Simeon and Levi, Dinah’s brothers, took their swords and came against the city while it felt secure and killed all the males. They killed Hamor and his son Shechem with the sword and took Dinah out of Shechem’s house and went away. The sons of Jacob came upon the slain and plundered the city, because they had defiled their sister. They took their flocks and their herds, their donkeys, and whatever was in the city and in the field. All their wealth, all their little ones and their wives, all that was in the houses, they captured and plundered. —Gen. 34:25–29

It’s hard to imagine the fleeing children, all ages 6–13, were now grown up and exacting this harsh revenge! But, it shows how much these formative years marked the sons of Jacob. This story helps us to better understand Jacob’s sons.

They left the sacked city and headed to Bethel, then went on to Ephrath where Rachel—Joseph’s mother—gave birth to Benjamin, then passed away.

Reuben now comes back into focus, as he did something that we are not given many details about: He slept with his father’s wife Bilhah.

While Israel lived in that land, Reuben went and lay with Bilhah his father’s concubine. And Israel heard of it. —Gen. 35:22

SIDENOTE: Bilhah and Zilpah were the servants of Rachel and Leah, and their standing with their mistresses did not seem to change after they were given to Jacob. They were given to Jacob as wives (Gen. 30:4, 9). After this, however, their titles vary depending on the passages they are referenced in. They are called: servants (Gen. 31:33; 32:22; 33:1), concubines (35:22), and possibly surrogate mothers (37:10).

That’s it. That’s all that’s stated in Scripture. We are not told that Jacob (Israel) did anything with this information, but that doesn’t mean that this action is without consequence—this fact will be remembered by Jacob many years later. But many more things must happen before the consequence of this action comes to light! We will continue this overview of Reuben and the sons of Jacob next week.

Thank you for partnering with us as we produce the world’s first animated and interactive Divine narrative of Scripture. iBIBLE breaks literacy barriers and will reveal God’s Word to all people, being available for free to translate into any of the 7,000+ living languages of the world. We are thankful for the prayers and financial contributions of Christians like you that enable us to do this God-sized task!