From the Daughters of Lot to King David

From the Daughters of Lot to King David

Welcome to a behind-the-scenes look at the research and artwork that goes into making each scene of iBIBLE. Today, we look at the story of Lot's daughters and their plot to bear children. 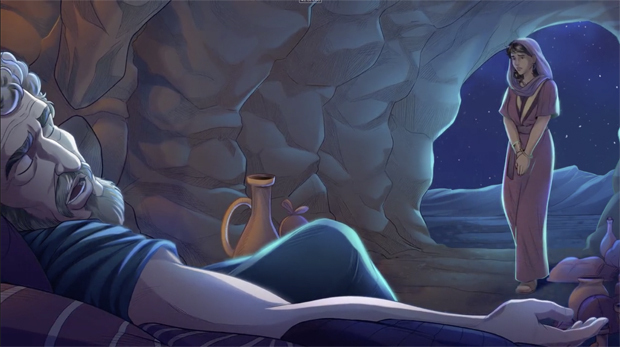 When we look at the entire Biblical narrative, we see how many of these seemingly unrelated events fit together. We also see how God can still use His people to accomplish His purposes despite their sinful and immoral acts. One such event involved the daughters of Lot, their offspring, and the lineage of David.

Two angels of the Lord, tasked with destroying Sodom and Gomorrah, arrived in Sodom and met Lot at the gate of the city. Persuaded by Lot to spend the night at his house, the angels broke bread with him and his family in his home. When the immoral men from Sodom and Gomorrah knocked on the door, demanding the angels be given over to them, Lot begged them not to act so wickedly. The angels said to Lot:

“Have you anyone else here? Sons-in-law, sons, daughters, or anyone you have in the city, bring them out of the place. For we are about to destroy this place, because the outcry against its people has become great before the Lord, and the Lord has sent us to destroy it.” –Gen. 19:12-13 [ESV] 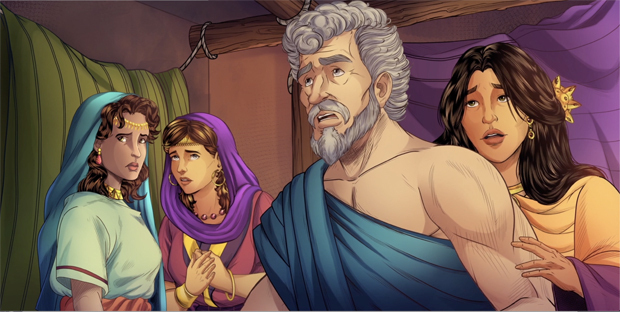 Lot tried to get the two men who were pledged to marry his daughters to go with them. But they refused. They thought that Lot was joking about the coming destruction. With time running out, the two angels forced Lot, along with his wife and two daughters, to leave their home, saying:

"Escape for your life. Do not look back or stop anywhere in the valley. Escape to the hills, lest you be swept away." –Gen. 19:17 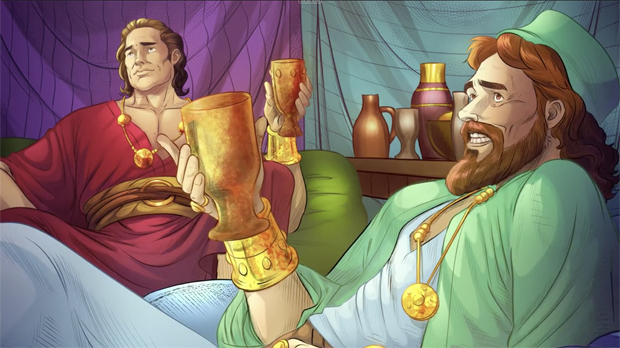 Lot's sons-in-law refused to believe him

The cities of Sodom and Gomorrah were ultimately destroyed. Lot’s wife looked back upon its destruction, and she became a pillar of salt.

Lot continued on with his two daughters and ended up living in a cave. He was too afraid to live in the city of Zoar even though the angels had permitted him to travel there and said they would not destroy it.

In the cave, the eldest daughter devised a plan.

And the firstborn said to the younger, “Our father is old, and there is not a man on earth to come in to us after the manner of all the earth. Come, let us make our father drink wine, and we will lie with him, that we may preserve offspring from our father.” So they made their father drink wine that night. And the firstborn went in and lay with her father. He did not know when she lay down or when she arose. –Gen. 19:31-33 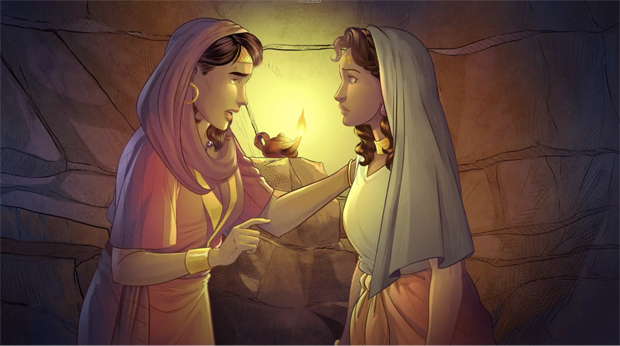 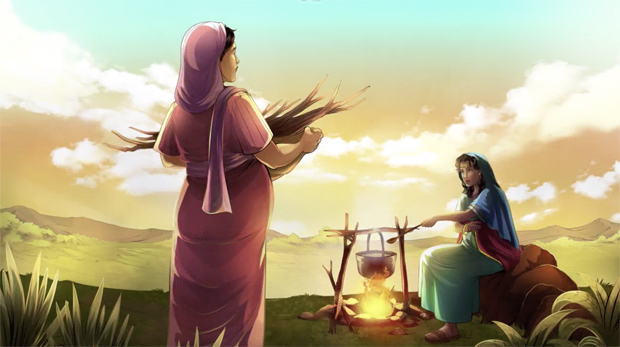 The actions of Lot’s two daughters were clearly immoral. They caused their father to be drunk and slept with him. It is no surprise, as we shall see as iBIBLE unfolds, that the Moabites and the Ammonites were considered pagans and enemies of the Jewish people.

However, the narrative takes an interesting turn. In later generations, Naomi (a Judean woman) traveled to Moab, and her son took a Moabite wife named Ruth. After the death of Ruth’s husband, she traveled with Naomi back to Bethlehem, converted to Judaism, and married Boaz. Ruth then had a son named Obed who had a son named Jesse who became the father of King David.

The Biblical narrative reveals that a Moabite woman, born of a pagan and anti-Jewish people, became the great-grandmother of King David. She is included in the lineage of Jesus!

The Bible continually points to God’s love and mercy even in the midst of man’s sin and immorality. As we produce iBIBLE, we see these events come to life like never before. Presenting the Bible as a single comprehensive story helps us connect all the events together and reveals God’s master plan to restore mankind!

While some encourage people to discard the stories and events of the Old Testament, we at RevelationMedia strive to present the entire narrative in a visual and dramatic format to engage each and every viewer. Thank you for helping us present and preserve the entire Biblical narrative!