Parental Advisory: The following email contains a mature subject matter that may not be suitable for young readers.

Last week, we looked at the archeology and the design of the city of Shechem for iBIBLE. Shechem serves as the backdrop for the story of Dinah. The entire story of what happens to Jacob’s daughter, Dinah, is told in Genesis Chapter 34. Today, we will look at what happened to her. 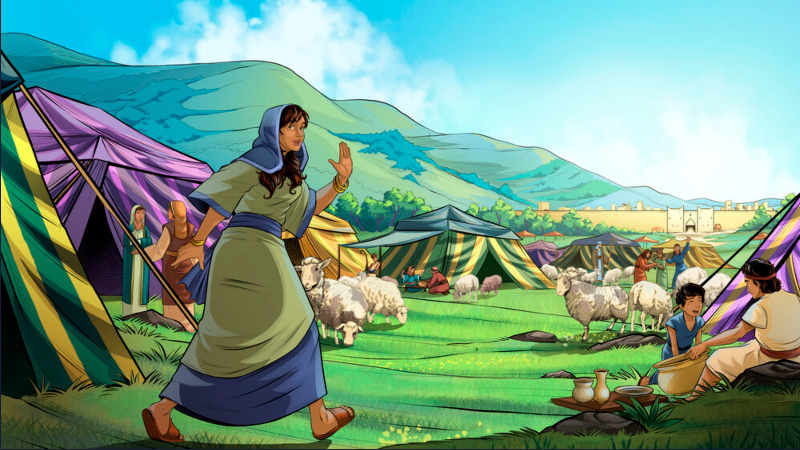 Dinah is the only daughter of Jacob mentioned by name in Scripture. It does not seem that she had any sisters, and we know that she was born to Leah in Haran before Rachel gave birth to Joseph:

And Leah conceived again, and she bore Jacob a sixth son. Then Leah said, “God has endowed me with a good endowment; now my husband will honor me, because I have borne him six sons.” So she called his name Zebulun. Afterward she bore a daughter and called her name Dinah. Then God remembered Rachel, and God listened to her and opened her womb. She conceived and bore a son and said, “God has taken away my reproach.” And she called his name Joseph. —Gen. 30:19–24a [ESV]

This gives us a rough estimation for Dinah’s age. She would have been at least 7 or 8 when the family fled from Haran. Then, they travelled back to Canaan, and many events occurred: Jacob negotiated with Laban, wrestled with God, made peace with Esau, and then moved to Succoth.

We don’t know how long Jacob’s tribe stayed in Succoth, but we do know that it was long enough for Jacob to build himself a house and shelters for his livestock, implying that some years went by.

So Esau returned that day on his way to Seir. But Jacob journeyed to Succoth, and built himself a house and made booths for his livestock. —Gen. 33:16–17a

Then, they moved to Shechem. As we saw last week, Jacob bought land, and his family dwelled in that land. We are not sure how long they lived there before the next events transpired, but we can estimate that at the time of the story, Dinah was between 13 and 15 years of age. This is reinforced by the actions that her brothers take later on. They would have likely been fully grown men to exact their revenge as they did.

Dinah then took a trip into town to visit the women of the land. We do not know if she travelled alone, nor if others were aware of her trip. There is also no indication of this being done in secret, so it could very well be that everyone was aware she was going out to visit the women. Was this her first visit? Did she visit frequently? Scripture does not specify.

Now Dinah the daughter Leah, whom she had borne to Jacob, went out to see the women of the land. —Gen. 34:1

During her travels, Dinah was seen by a young man named Shechem. Who was he? 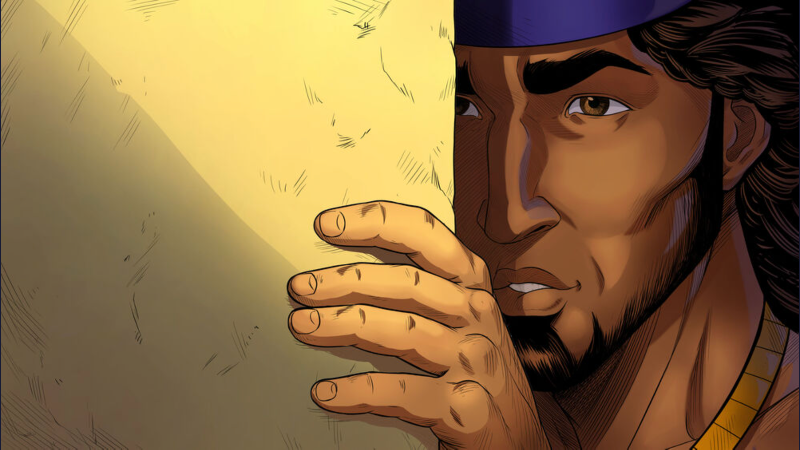 He was not the only son of Hamor; he had brothers.
And from the sons of Hamor, Shechem’s father, he bought for a hundred pieces of money the piece of land on which he had pitched his tent. —Gen. 33:19

He was held in high honor.
And the young man did not delay to do the thing, because he delighted in Jacob’s daughter. Now he was the most honored of all his father’s house. —Gen. 34:19

This was a well-respected, powerful young man who could act with impunity. And so, he did. He took Dinah against her will and raped her.

When Shechem son of Hamor the Hivite, the ruler of that area, saw her, he took her and raped her. —Gen. 34:2 [NIV] 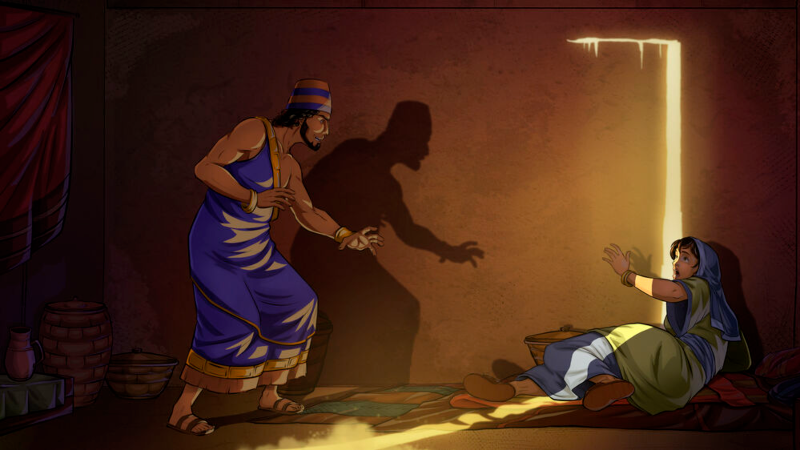 Shechem kidnaped Dinah, defiled her, and then kept her locked up. And then he began to have feelings for her. As we will see later, he says he even fell in love with her.

Then Shechem left to find his father. His plan was to negotiate with Dinah’s family so that he could keep her as his wife. And he demanded that his father make it happen.

He tried to speak tenderly to her. And his soul was drawn to Dinah the daughter of Jacob. He loved the young woman and spoke tenderly to her. So Shechem spoke to his father Hamor saying “Get me this girl for my wife.” —Gen. 34:3–4 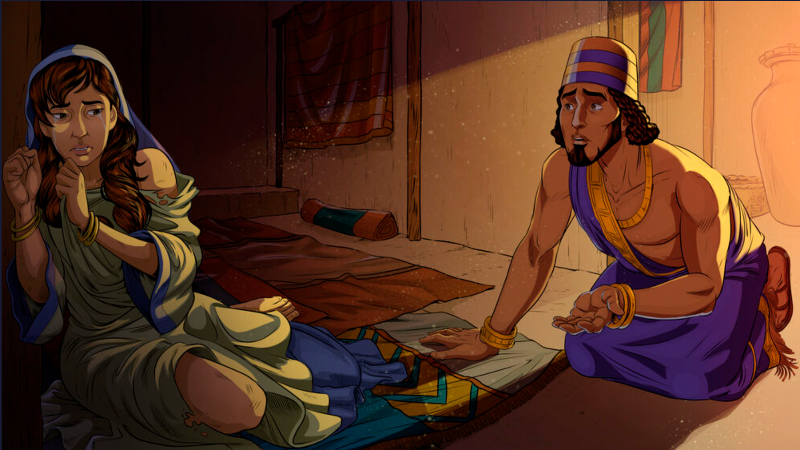 There was no indication of regret or remorse from Shechem.

SIDENOTE: Some claim that this was a common practice in this time period. If a woman was not married, a man could “lie with her,” and then work out the “bride price” with her family later. Even if this were the case, this was clearly not the practice of Jacob’s tribe, and it was not how God intended women—who are created in His image—to be treated. Dinah’s brothers were outraged by the brutal assault of their sister.

Meanwhile, Dinah was locked away, and was possibly under guard. Her only hope was that her family might rescue her. We don’t know if she knew about Shechem’s plan to negotiate with her family or not. We can only imagine her deep sense of despair as she hoped for deliverance. 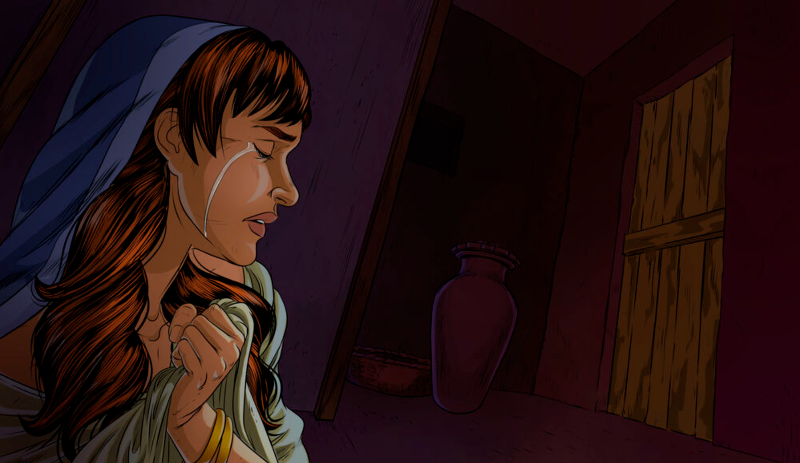 Next week, we will look at the negotiations that ensue with Hamor and Jacob’s family.

Thank you for partnering with us as we create the first complete presentation of God’s Divine narrative. iBIBLE shows all of the stories in the Scriptures—even those that are difficult or painful to read. When we hold the entire narrative in view, we can see how Jesus bore the sin and shame of all people and carried it to the cross. God does not leave us nor forsake us, and we have great hope in our High Priest who can sympathize with our weakness (Hebrews 4:15). This is the hope we will bring to the entire world for FREE with iBIBLE.