Enhancing the Story of Job

This week, we take a closer look at how the story of Job has been enhanced by new animation and a commitment to the story presented in Scripture.

Previously, we had published an episode of “The Animated Bible Series,” about Job. However, when we transitioned to iBIBLE, we made the commitment to focus exclusively on the actual Scripture passages, and to increase creativity of the scenes. So, as you can imagine, with the emphasis in Scriptural foundation and updates to creativity, the Job scenes in iBIBLE look quite different. 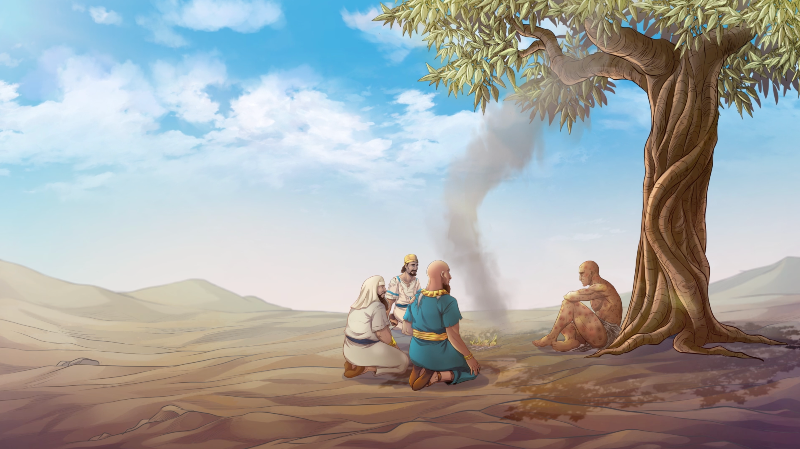 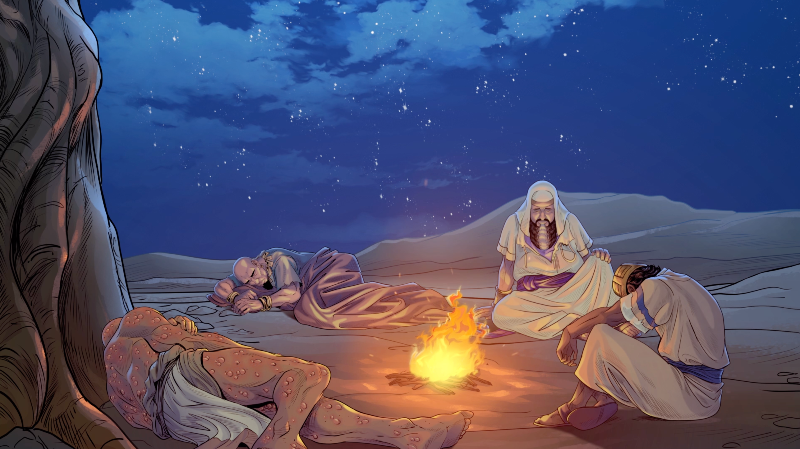 After careful research of the Book of Job, including research from the Septuagint, we learned that Job had actually spent months in agony and was forsaken by his friends and family. The following Scriptures highlight some of the trials Job endured after being afflicted with the boils:

And he took a piece of broken pottery with which to scrape himself while he sat in the ashes. —Job 2:8 [ESV]

SIDENOTE: Commentary from the Septuagint explains this to be the place outside the city where garbage was thrown and burned: the “ash-heap.” The fact that Job was sitting outdoors in his destitute state is confirmed when his friends arrived and “sat with him on the ground.”

“He has put my brothers far from me, and those who knew me are wholly estranged from me. My relatives have failed me, my close friends have forgotten me. The guests in my house and my maidservants count me as a stranger; I have become a foreigner in their eyes. I call to my servant, but he gives me no answer…My breath is strange to my wife, and I am a stench to the children of my own mother...All my intimate friends abhor me, and those whom I loved have turned against me.” —Job 19:13–19, excerpted

“So I am allotted months of emptiness, and nights of misery are apportioned to me.” —Job 7:3

“But now they laugh at me, men who are younger than I, whose fathers I would have disdained to set with the dogs of my flock.” —Job 30:1

We can gather many clues from what Job tells us:

1. He was outside.
2. He lived on the street.
3. He was alone, yet in a place where his friends could see him from far away.
4. He sat on the ground.
5. He was in a place where there were ashes and pottery shards.

Given the above and our commitment to strive to follow the narrative of Scripture as closely as possible, we are now redesigning the place where Job had been suffering for months on end. We are recreating an environment more reminiscent of a garbage dump outside the city, but close enough to the city where he still would have had interactions with people, as Job expresses here:

“Men have gaped at me with their mouth; they have struck me insolently on the cheek; they mass themselves together against me.” —Job 16:10

Below is the initial concept of this new scene. 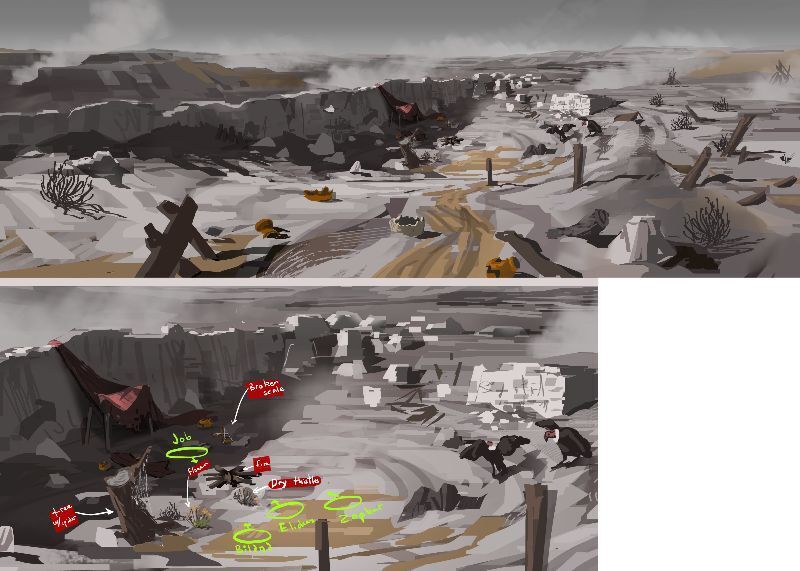 When Job’s friends arrive, they join him in his desolate dwelling, and after seven days, their exchange begins. Here are some pre-production sketches of what this will look like: 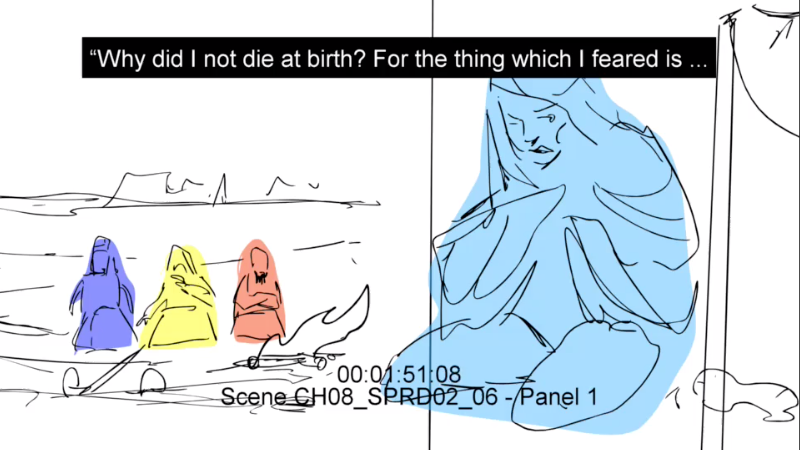 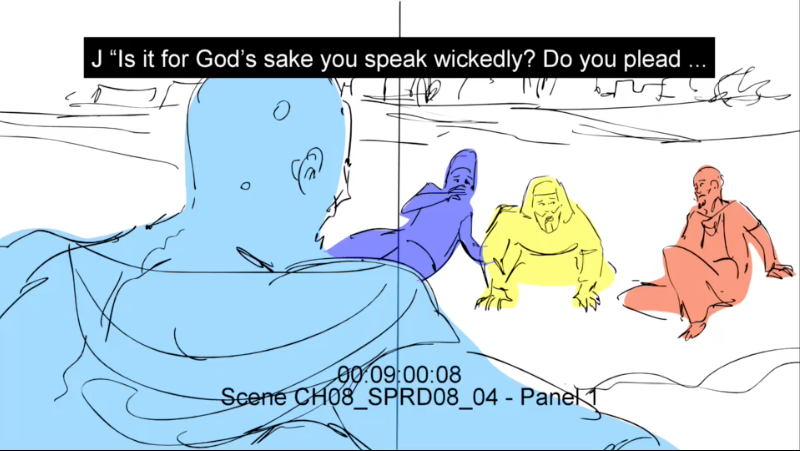 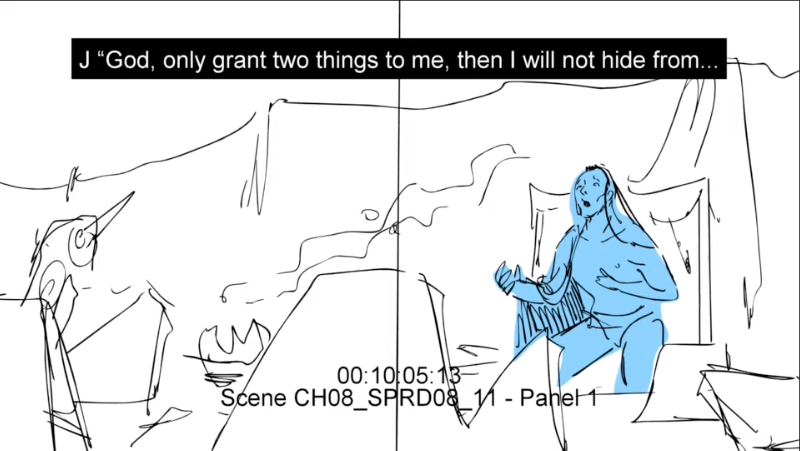 In producing iBIBLE, there is always a balance to be struck between creativity, productivity, and publishing each episode. To reveal the events surrounding the life of Job in a way that was faithful to Scripture, we decided that it was worth taking a second look at the scenes. By adding to their detail and drama, the presentation of Job in iBIBLE more closely aligns with God's Word.

Thank you for your ongoing support as we strive to deliver a quality and accurate presentation of the entire Biblical narrative in a visual format. We look forward to sharing more scenes of the recreation of Job in the weeks ahead!